MUMBAI: The Centre has created a detailed road map for goods and services tax (GST) audits barely 20 days after the levy’s rollout, listing risks, target industries and even potential auditees for officials examining corporate India’s transition to the new regime.

In the past week, the government has reached out to tax commissioners on the audit process, highlighting the risk areas. Beginning next week, therefore, officials could visit companies to assess whether the transition from the multiple to the single producer levy from July 1 stuck to the rule book.

Their mode of inspection will also be very different from the traditional script. “They would focus on credit transfer or transition from the old tax regime to GST. The government already has the requisite sets of data in place for this,” a tax official told ET on the condition of anonymity. 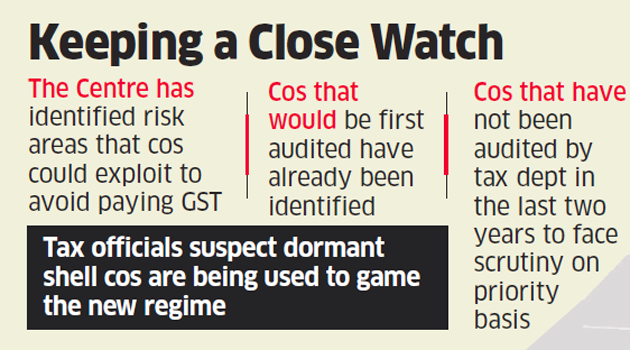 The government has shared sector-wise “risk factors” companies might exploit to avoid paying GST. According to the tax official quoted above, categorisation or risk evaluation for these audits has been created by using Big Data analytics.

The government has used statistics of the last two financial years to create the audit checklist.

In the internal government note shared with middle-rung tax officials, they have also been told to cause the “least inconvenience” to auditees and to even educate the taxpayers, especially small and medium enterprises (SMEs).

Industry experts, however, pointed out that a granular scrutiny could mean additional tax-related effort at many companies, as the GST audits would also take earlier taxes into account while evaluating the transition.

IT sector to see up to 38% fewer jobs this fiscal Is it MAKE IN INDIA or QUIT INDIA ?

How To Practice Self-Care: 10 Worksheets and 12 Ideas How to Use Your Personal Branding to Attract Employees and Clients