As one of your trusted moving companies NJ, we are here to help you understand the facts and trends that surround job relocation.

According to our survey of 1,000 people,the most common reasons people relocate are to seek a higher paying job or career advancement (49.3%), find a job closer to family (20.5%), or transfer within an existing company (11.1%). Others moved because they relocated their business, or their job moved to a new facility (7.7%). Others reported miscellaneous reasons (9.2%), and 2.2% moved due to a company acquisition.

These motives tell us why people choose to relocate for work, but those numbers don’t tell the whole story. To understand the bigger picture, we looked to the demographics, starting with age.

We found that most who moved for work ranged between the ages of 25 and 34 (40.2%), followed by those aged 18 to 25 (28.9%), many of which include new graduates who took their first jobs in new locations, far from hometowns and family.

Young and mid-career professionals in the 35-44 age group (16.6%) also proved to be willing to relocate to advance in their careers. The ages 45 to 54 group (10.2%), moved for a variety of reasons, both to chase opportunity or to move closer to family. Lastly, the 55+ group (4.1%) moved to find jobs to advance their careers or to further their quality of life. 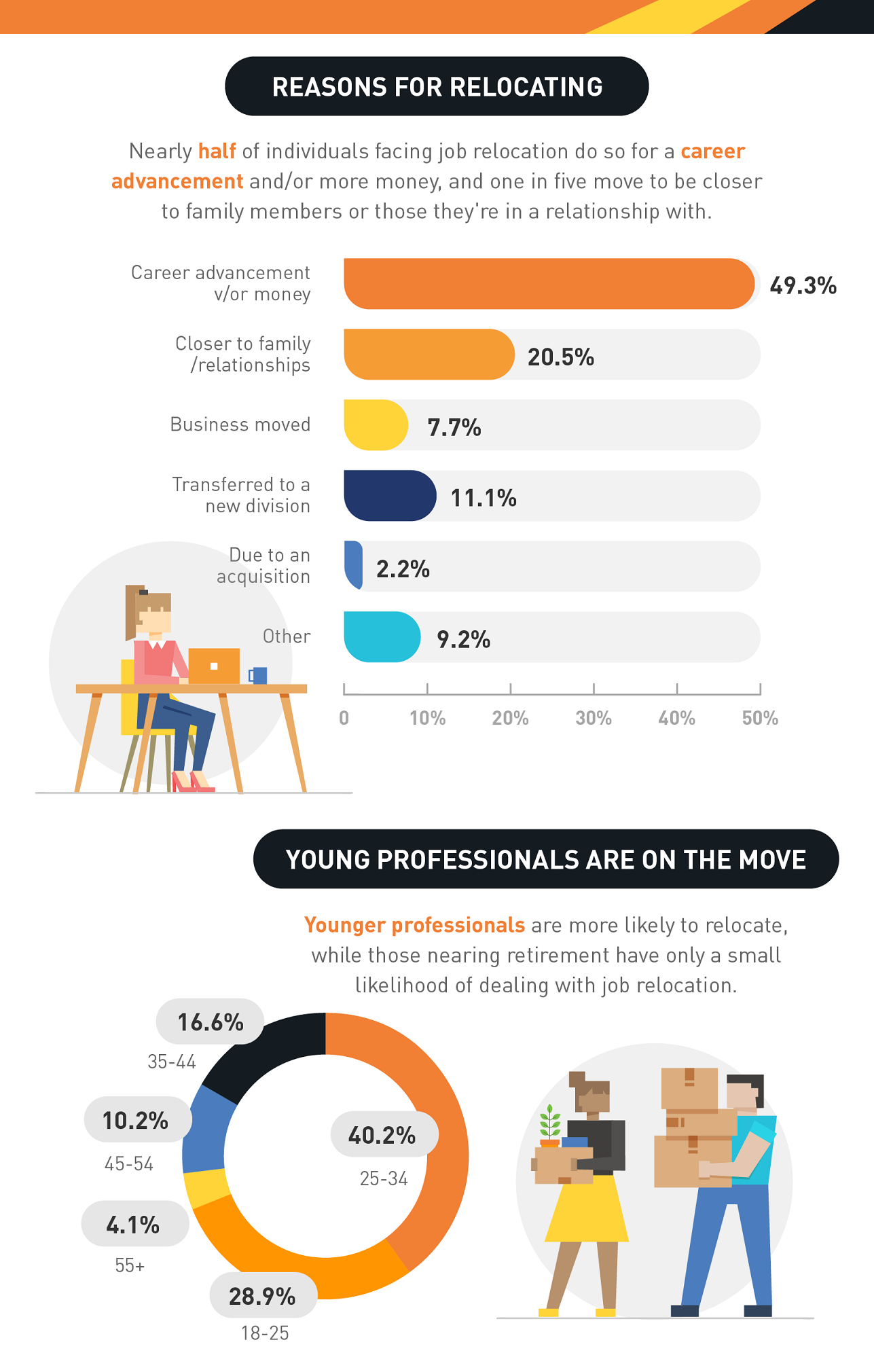 Moving by yourself can be stressful and pricey, especially when you are moving long-distanceto a new city. Our survey reveals that some respondents ease the cost and stress of job relocation with some assistance from their employers, and of course, these contributions go a long way to ease the mind and the wallet.

Some 29.86% of responders reported that they received no moving assistance at all from their employers. Others reported that their generous employers even received funds for sponsored trips to look for housing. This lucky 7.2% of survey respondents said this fund provided a buffer of money and time so they could find just the right home in their new town.

Even when you receive relocation assistance, moving poses unique challenges. It can be unnerving to find the right house or apartment and to settle into a rhythm once you’ve identified and moved into a new neighborhood. 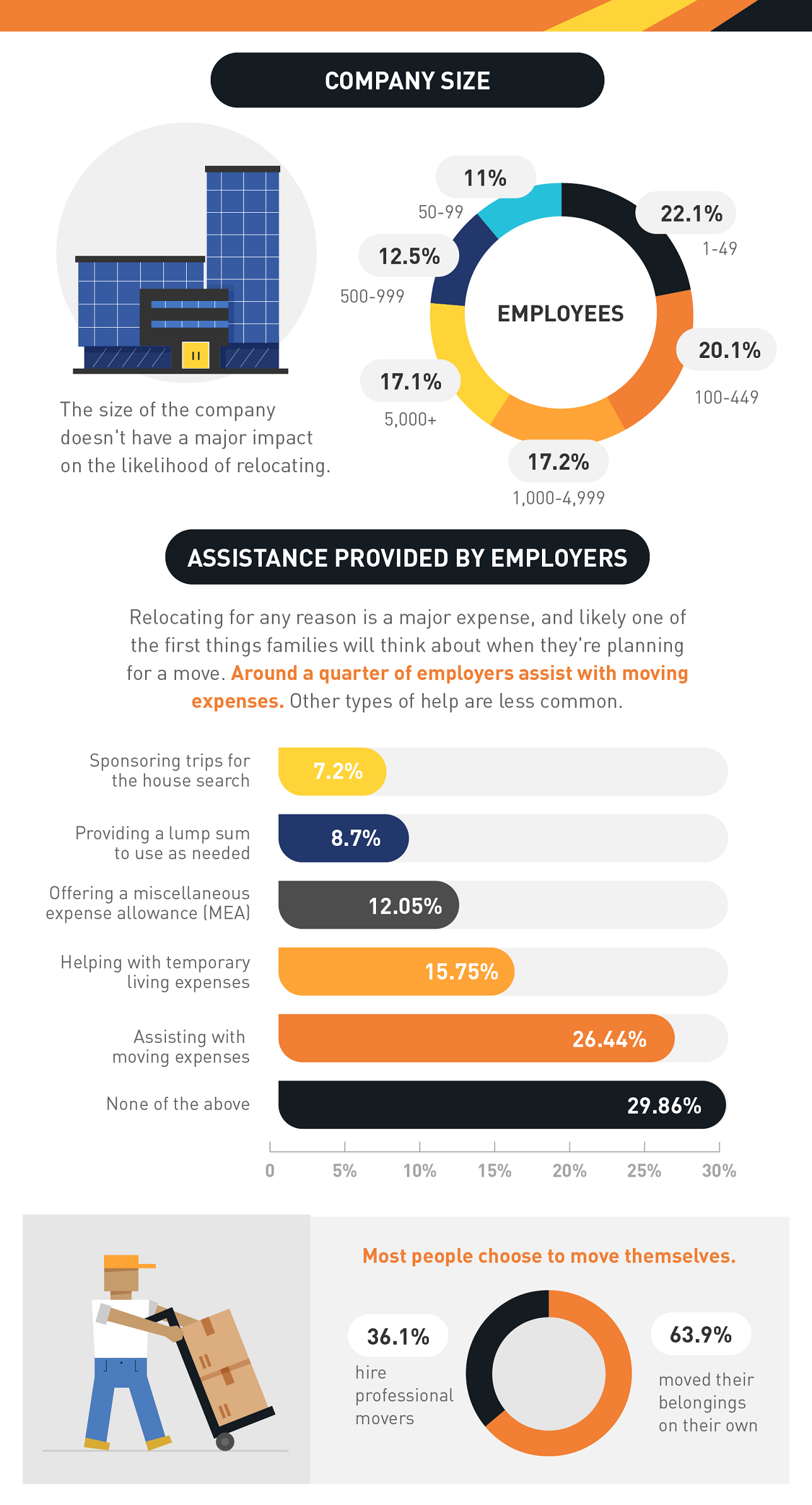 Employers sometimes don’t help matters, adding more stress to the equation by demanding their new employees start within a very tight window. In our survey, 41.5% of respondents stated that they only had 0-30 days to relocate and settle in before starting their positions.

According to our results, we found that people are willing to move long distances for the right opportunity. In fact, they seemed to welcome the opportunity for adventure and a change of scenery, with 23.3% of participants moving more than 1000 miles, 23.4% moving 500 to 999 miles, and 227 responders (22.7%) relocating 201 to 499 miles for a job.

However, the largest group of people who relocated for a job reported that they moved from as close as 1 mile away to up to 200 miles. This radius proved to be just close enough to visit family and friends, but also offered a wide enough net to catch more lucrative new job opportunities. 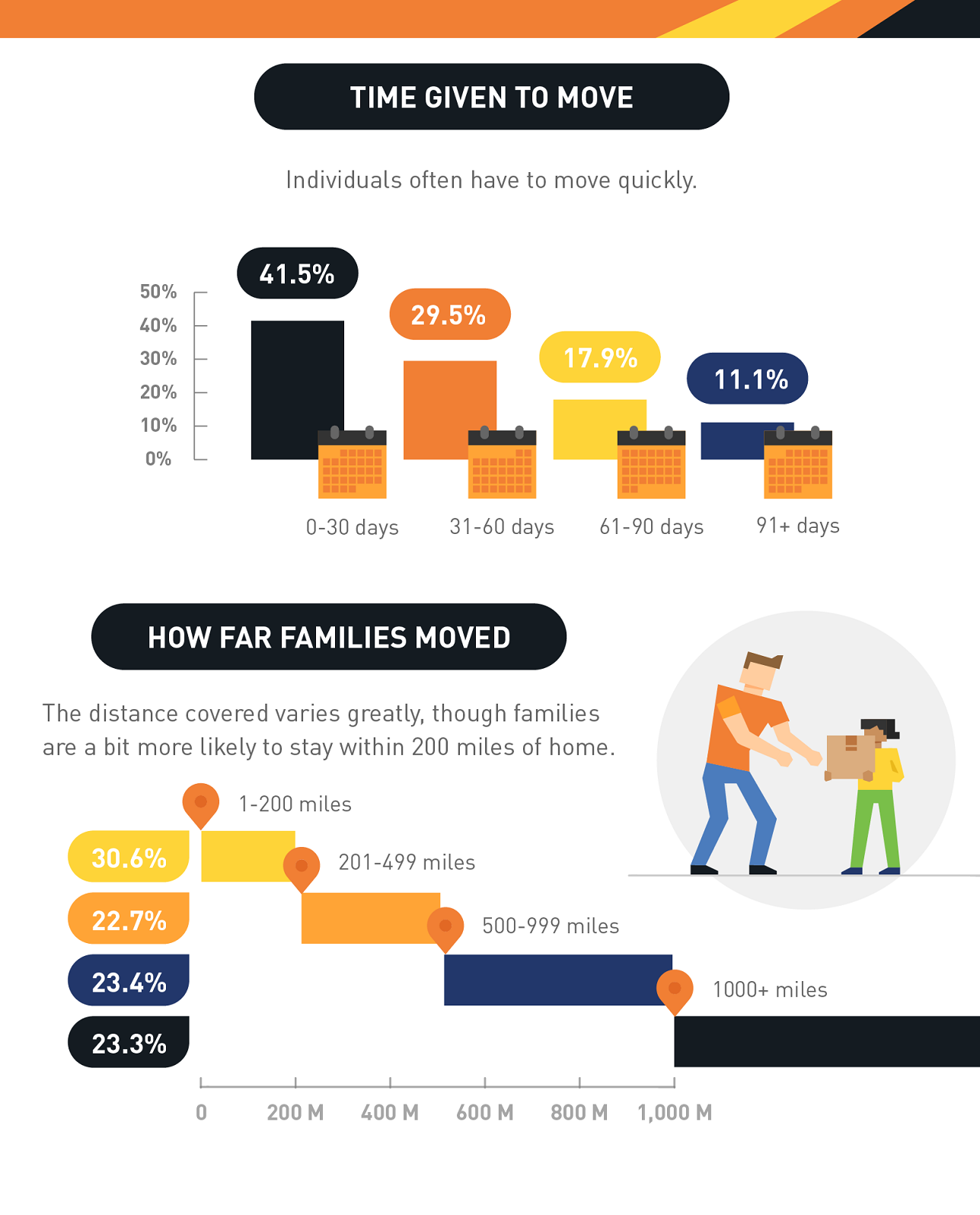 Getting acclimated to a new community proved to be the most challenging element of many people’s moving experiences, reported 33.9% of survey respondents, while others (33.1%) were most stressed by the process of finding a new home. Though they had a great job lined up, 15.9% found that making new friends was not so simple, and for them, this step proved to be the most challenging part of relocating.

Some people (10.1%) felt most overwhelmed while trying to line up new services, from utilities to library cards and new family doctors and dentists. Seventy other participants listed miscellaneous stressors associated with job relocation, from getting used to different weather to enrolling children into new schools.

Despite the challenges, uncertainty, and stress, the majority of people (54.6%) believed that the benefits of job relocation outweighed the challenges. Others, 36.7%, perhaps had not yet made up their mind either way, while the 8.7% minority did not like job relocation at all. At the same time, 63.9% of people did not utilize a professional moving company, but 361 people did hire professional movers to help them relocate for a job.

When it comes to job relocation, it pays to line up all the help you can to reduce stress and ease your transition to an exciting new job opportunity and a new home. Professional movers take over the boxing, packing, and transporting so you can keep your focus on conquering your new job. 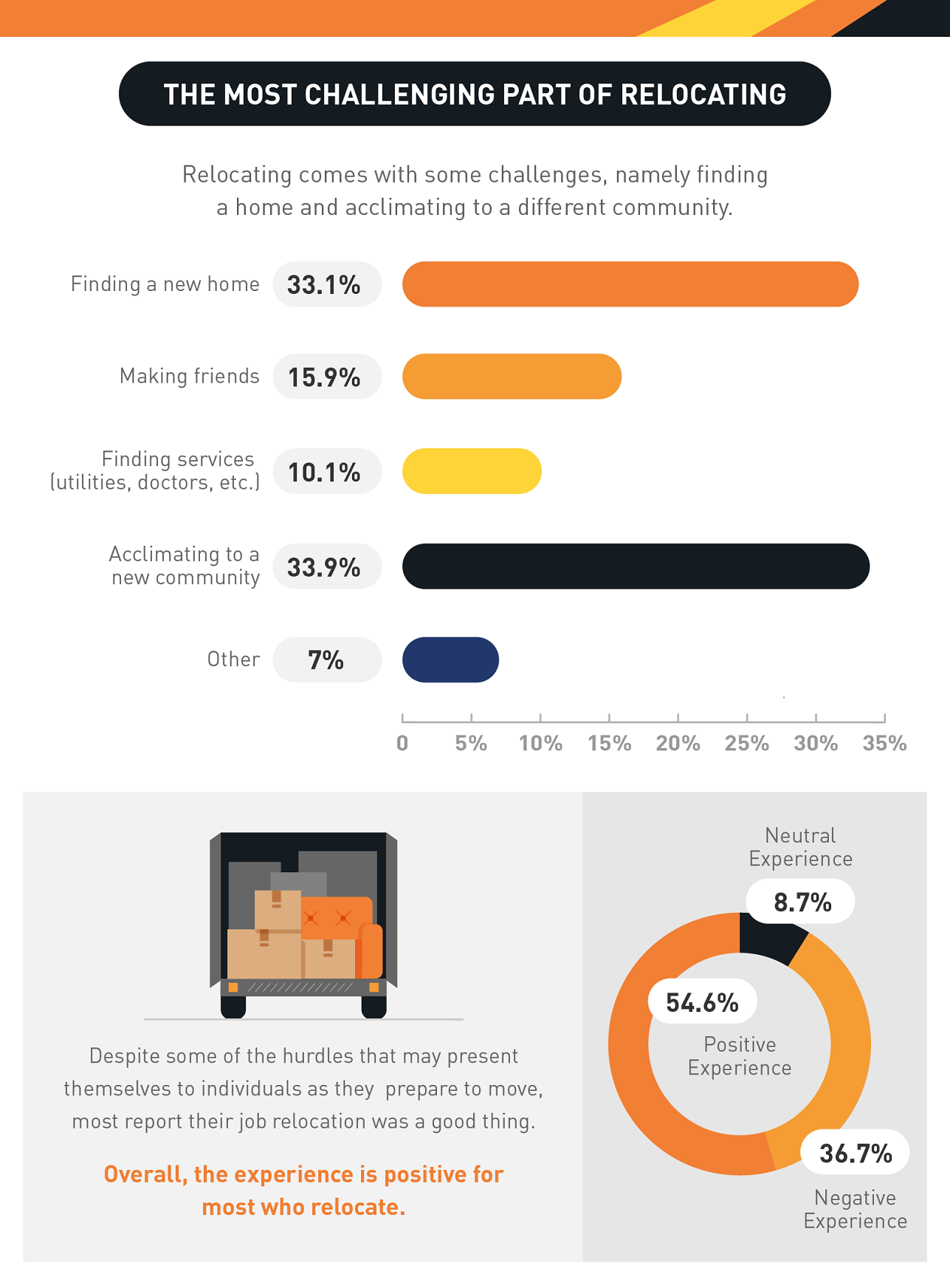 We surveyed 1,000 individuals who have relocated for a job previously.

Republished with kind permission and originally published at www.allied.com

The Layoff.com - a platform for the Aggrieved What if…The Value of an Organization Guidance System Healing the Workplace with Trust