That bond has changed forever. The pandemic snapped a bond that lasted more than a century. Even James Bond says, 2020 is no time to die.

None of us will forget 2020. The pandemic changed many equations that had stood the test of time (but not a pandemic). The world of work got a reset. The employer-employee relationship got redefined. The relationships between family members changed. Neighbors discovered each other and communities formed new bonds (some old bonds broke) as the pandemic showed up inside gated communities. In a status conscious world, COVID-19 was the great leveler.

For more than a hundred years, studios have made movies. There is a time-tested routine that has been followed for more than a century. The movies are announced in a blitzkrieg of interviews and exclusive photo-ops with the stars. The audience queues up to watch the film in the theater. Then it shows up in the OTT circuit for a second lease of life until someone stumbled on it again.

For Your Eyes Only

In early March of 2020, it was announced that the release date of the latest James Bond film (and Daniel Craig’s final outing in the role), No Time to Die, was being postponed from April to November 2020. The experts had told us that by Thanksgiving, James Bond would make his appearance. In October, we learned that fans would have to wait for 2021 to meet Bond. Why did that happen? The ‘Trolls’ are responsible.

“Trolls World Tour,” an animated sequel to the 2016 hit was supposed to hit the movie theaters on April 10 this year. With all the uncertainty surrounding the lockdown in different countries and travel restrictions, Universal studio took a call to run it as a View On Demand digital release on platforms like Apple TV etc. In the first three weeks, they collected $100mn through five million rentals in US and Canada. The original “Trolls” made less money than this in its five-month domestic theatrical run.

The National Association of Theater Owners fumed at Universal’s move. They said,

“While Universal may be pleased with the PVOD results of Trolls World Tour, this outcome should not be interpreted as a sign of a ‘new normal’ for Hollywood.”

Incumbents can never see the writing on the wall or home theater. There is always a Dreamer who will step in to address an unmet need of the consumer.

No Time To Die

Angrezi Medium starring Irrfan Khan was the last movie that was released in the multiplexes in India. Its release on Disney Hotstar gave it an extended lease as fans watched Irrfan one last time before they bid him goodbye. Shoojit Sircar’s “Gulabo Sitabo” featuring Amitabh Bachchan and Ayushman Khurrana released on June with Amazon Prime. The floodgates had opened. With more than 40 OTT platforms to choose from, movie makers from Bollywood are riding the explosive growth in online viewing.

After the bombing of the Twin Towers, airport security protocols changed worldwide. Travelers accepted it. The standards are unlikely to be lowered at any time. Viewing movies in crowded theaters is a thing of the past. Multiplexes have to act fast if they have to cut their losses.

The Man With A Golden Gun beat a retreat. In a year that has seen millions of deaths, he decided he will only live twice (in theatres and small screens) in 2021. I will take a bet that James Bond will appear on the small screen for more viewers than the cinema. 2020 is no time to die. 2021 is unlikely to be different. COVID-19 has been the biggest Market Shaper of all times.

The Two Ways of Seeing the World | Simon Sinek 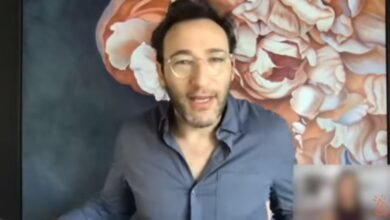