Forget “The 7 Habits of Highly Effective People.” These days, gurus across the internet claim dozens of routines will put you on the path to fulfillment. In one camp, there are the evangelists of wholesome habits: Get up early, make your bed, and exercise, and you’ll inevitably encounter success. Then you have the mindfulness contingent, who says daily meditation will deliver clarity to even the most frazzled capitalists. Other habit-based programs take consistency to the extreme, suggesting eating and wearing the same things each day. If you’re skeptical of these well-intentioned suggestions, don’t kick yourself for your cynicism. It’s hard to know if any of these habits truly work for you––or anyone. That’s why we experimented on our own, surveying over 1,000 people on how successful they feel in several major life areas. We then asked them about their habits to gain a statistical view of the practices that correlate most closely with fulfillment. If you’ve wondered which habits allow other people to achieve their purpose and prosperity, you won’t want to miss our results. Read on to see how successful people consistently spend the one resource they can’t replenish: their time.

Before we explore any particular habits, it’s helpful to learn how people define success more specifically. After all, it’s something of an abstract concept, although most participants agreed on its major components: More than 80 percent identified happiness and freedom as essential parts of success. Fulfilling family life and good physical and mental health were also popular selections. Interestingly, a smaller percentage said success could be defined regarding professional growth, one’s job, or one’s income. Even fewer said a great sex life was an integral part of succeeding, with less than 40 percent of respondents saying this kind of passion was a part of their vision for fulfillment. Some compelling differences cropped up among men and women, however. Women were slightly more likely to emphasize freedom, family life, and physical health. Conversely, men were more likely to associate success with mental health instead. Generational contrasts included a drop off in focus on family life with each successive generation. Over 90 percent of baby boomers said family was essential to success, whereas only 75.7 percent of Gen Xers said the same. Among millennials, family life didn’t even crack the top five success characteristics.

Calling ourselves a success 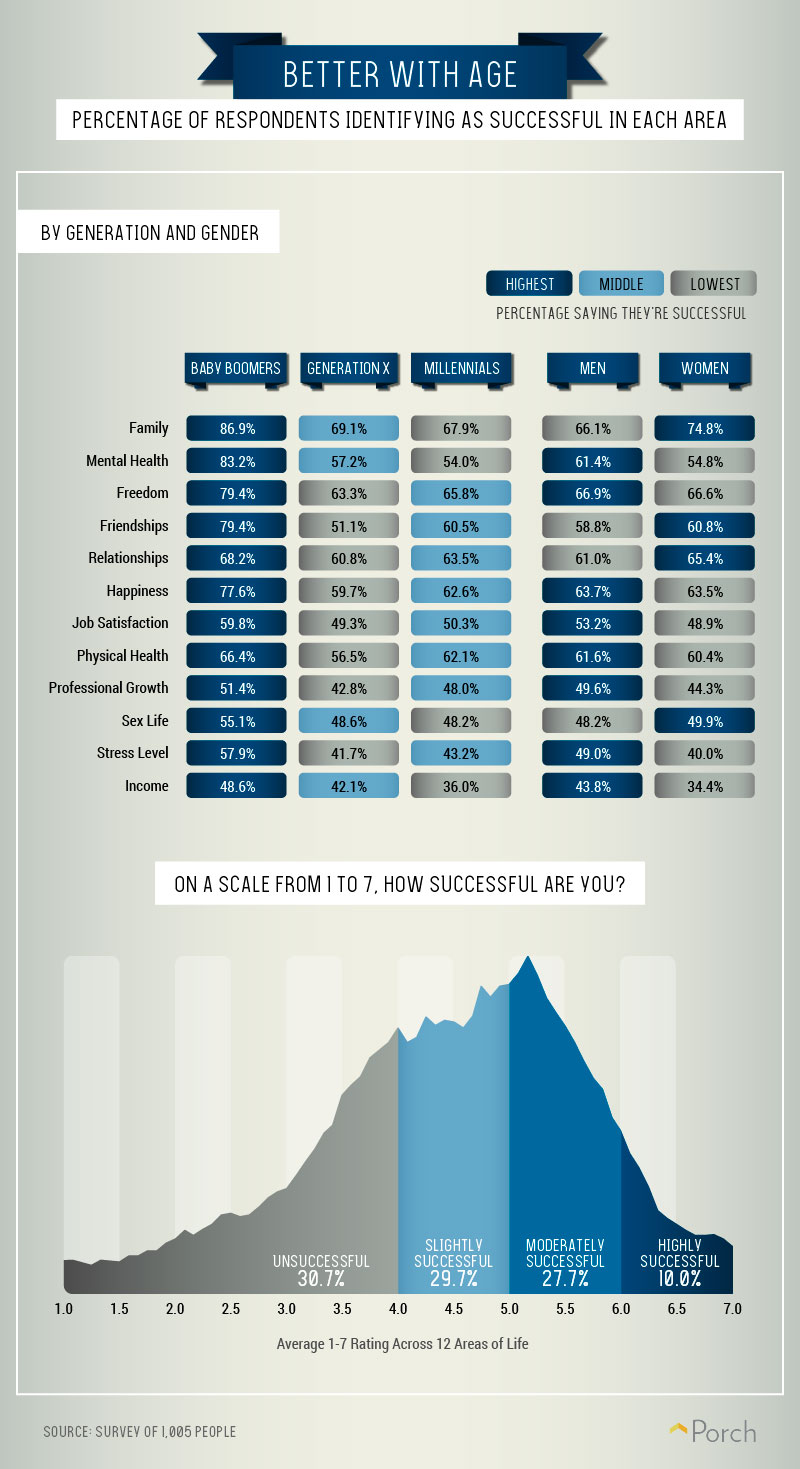 In every life area we designated, baby boomers were most likely to claim success. Call them boastful, but bear in mind they’ve had more time to succeed––and appraise their experiences with more gratitude in retrospect. In many ways, younger generations were dramatically behind in self-reported success, such as in the realms of family, friendships, and mental health. Interestingly, however, millennials were more likely to call themselves successful than Gen Xers in most categories. Perhaps these findings reveal Gen Xers in the throes of a midlife crisis or the hubris of youth among the millennial crowd. Contrasts among men and women yielded interesting insights as well, with female respondents more likely to feel successful in their family lives, friendships, and relationships. Meanwhile, men had the distinct upper hand concerning mental health and stress level. In what could be interpreted as a grim indication of workplace inequalities, men were also more likely to feel successful regarding their professional growth, jobs, and incomes. Given the lingering pay gap in America, there may be good reason nearly two-thirds of women feel thwarted on the subject of earnings. Overall, however, roughly three times as many people called themselves “unsuccessful” versus “highly successful.” That statistic may speak volumes about human nature and self-esteem, but we have a more pressing question to consider: What do these folks who feel highly successful do differently? 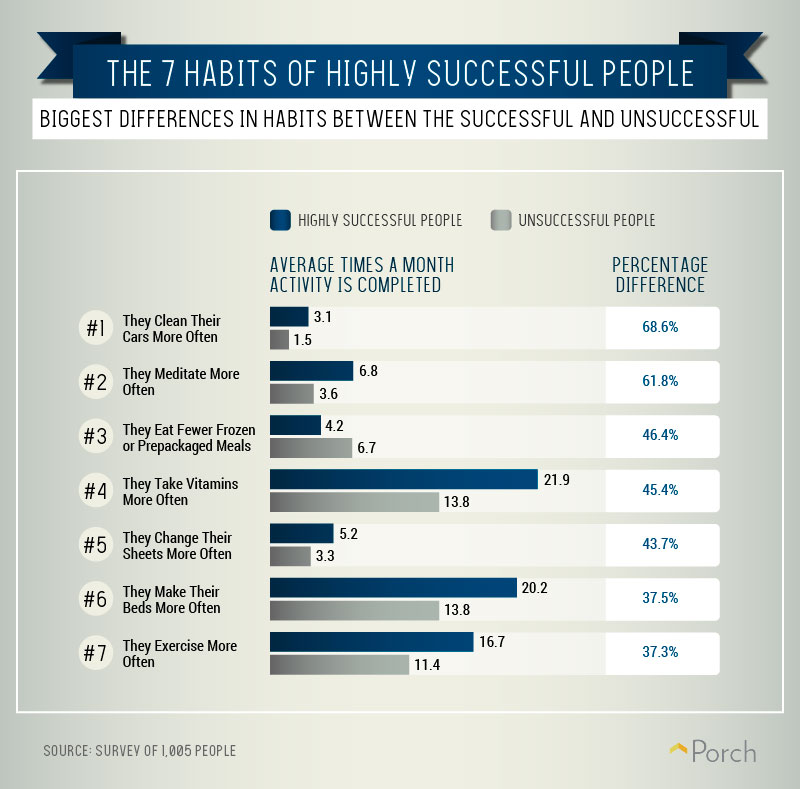 When we considered which habits highly successful people practice to a much greater extent than unsuccessful individuals, two major themes emerged: cleanliness and healthy choices. In the category of tidy practices, we found highly successful people cleaning their cars, changing their sheets, and making their beds far more often. Some suggest completing these tasks can help us feel accomplished and in control, so we face the rest of our days with some momentum. The same could perhaps be said for healthy habits that highly successful cohort tended to practice, including exercise, taking vitamins, and resisting frozen or prepackaged meals. In addition to these habits, meditation was a common denominator among folks who felt highly successful, and notably absent from the routines of those who felt unsuccessful as well. In fact, meditation was the habit around which successful and unsuccessful people differed most in several key life categories: friendships, jobs, mental health, professional growth, and stress. Given these potential payoffs, it’s no wonder many companies are encouraging their employees to adopt meditation practices in the workplace. 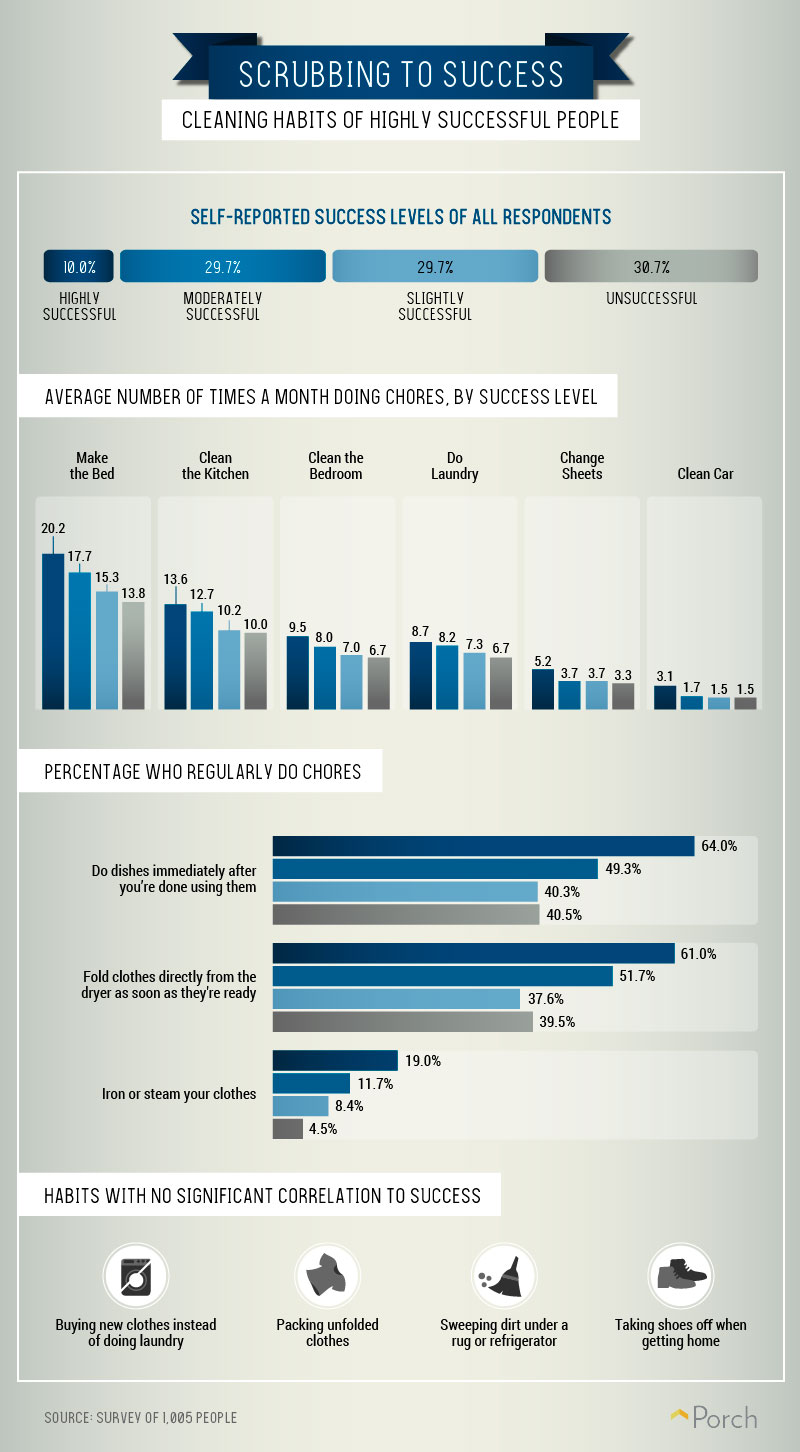 Let’s take a closer look at how cleanliness might correlate with success, comparing the frequency with which different groups tackle household chores. In every specific cleaning activity studied, those who felt the highest degree of success tidied up most often. This positive correlation continued at every level of self-professed success: Those who felt moderately successful cleaned up more often than those who felt only slightly successful, who did so more frequently than unsuccessful respondents. Sometimes, the immediacy of cleaning seemed relevant as well. Nearly two-thirds of highly successful people did the dishes right after they were done using them. Similarly, 61 percent of highly successful people folded clean laundry as soon as the dryer was finished. Then again, some orderly habits did not correlate with success according to our data. Packing unfolded clothes in one’s suitcase or sweeping dirt out of sight rather than into the trash didn’t seem to hurt anyone in the long run, nor did buying new clothes instead of doing laundry.

Maintaining the body and mind 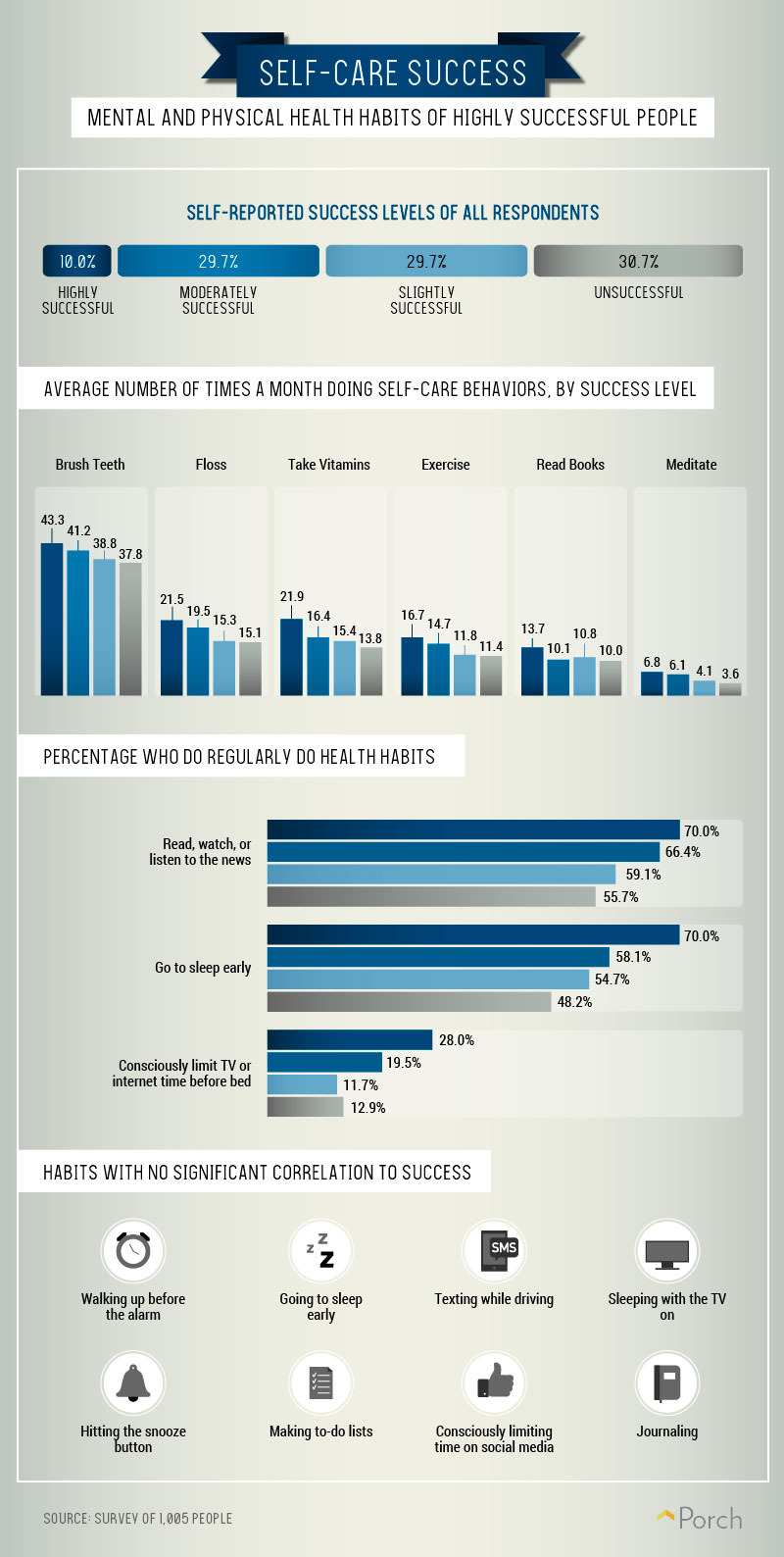 Self-care should pay off in obvious ways: You don’t need to be a dentist to understand the benefits of flossing. But our findings indicate highly successful people were quite disciplined in this regard and feelings of success were correlated with the frequency of these self-care efforts. This connection extended to measures aimed at maintaining physical health, such as exercise and dental care regimens, but highly successful people also read and practiced meditation more often, suggesting intellectual well-being is also paramount. Successful respondents were also more likely to consume news regularly, a finding that contradicts recent research suggesting staying constantly informed can actually prove harmful. Additionally, successful people were less likely to stay up late, perhaps because so many of them are early risers with busy days ahead. On the other hand, our data demonstrate no correlation between success and going to sleep early or waking up before one’s alarm. Perhaps when it comes to beauty rest, success demands a reasonable middle ground. 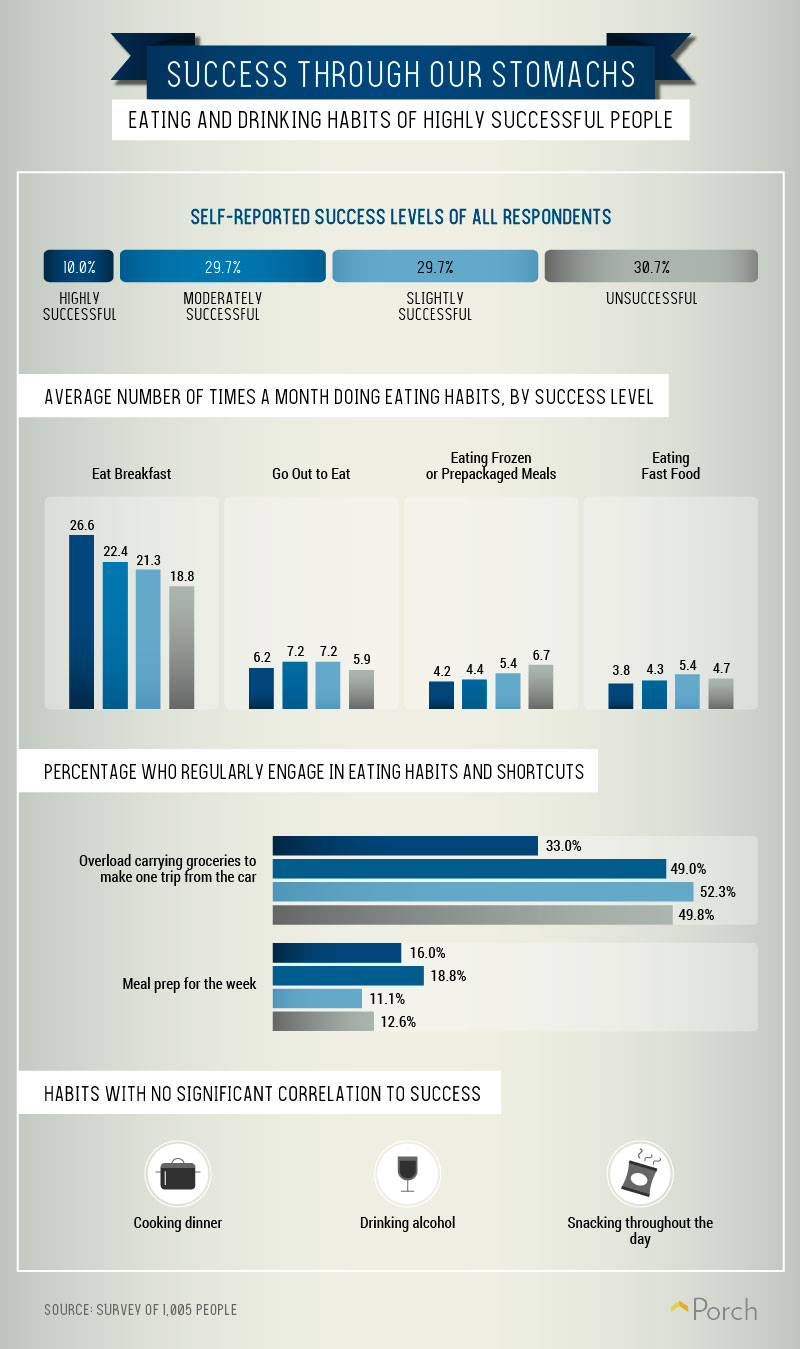 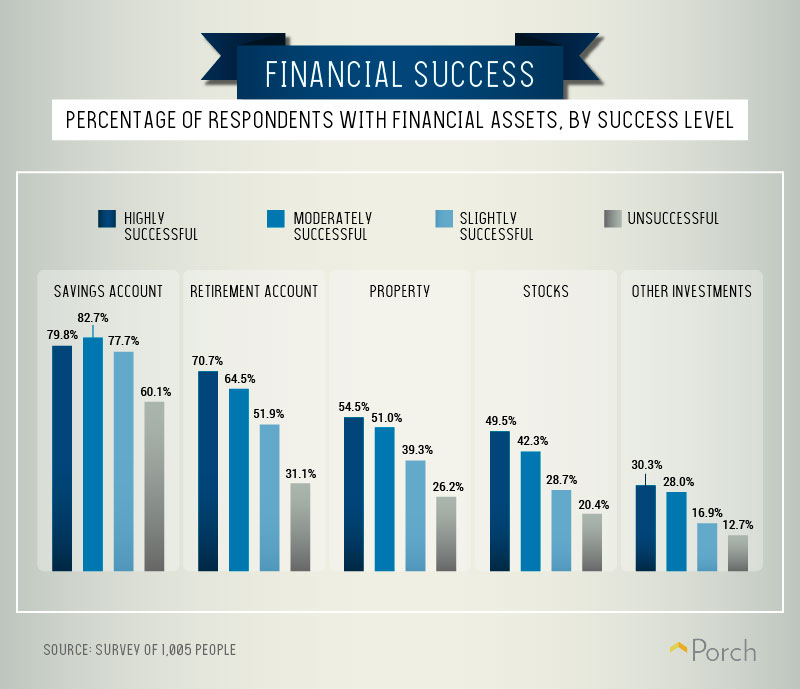 However much we resist materialism, financial concerns arise at many points in our lives and may shape our understanding of success. We found people who identified as moderately or highly successful were quite likely to have a range of investments, especially savings and retirement accounts. Conversely, less than a third of people who felt unsuccessful had a retirement account, and only a fifth were invested in stocks. These data resonate with broader concerns about Americans’ lack of retirement savings and other assets that might support them later in life. Although some have said homeownership is no longer part and parcel of the American dream, property ownership was substantially higher among people who felt highly or moderately successful. Additionally, less than a fifth of slightly successful or unsuccessful respondents had other investments, such as an ownership stake in a business.

Perhaps we’ll never incorporate all potentially healthy habits into our lifestyles simultaneously––incremental improvement is more attainable. If our findings have revealed habits you find admirable, establish some priorities and pursue them passionately. If our data suggest anything, it’s that small actions can have sweeping implications. So set a few manageable goals for yourself and discover achievement is possible. After all, hopeful thinking may be the most important habit successful people have in common. If you’re looking to transform your home into an orderly space conducive to good habits, you don’t have to go it alone. Whether in need of painting or pest control, Porch helps homeowners connect with trusted professionals. Letting the pros handle your home-improvement hassles––now that’s a habit we can all get used to.

To compile the data above, we surveyed 1,005 people through Amazon’s Mechanical Turk. The surveys all took place in March 2018. Each person was first asked to answer how often they performed certain behaviors and later asked to evaluate their success levels on a scale of 1 to 7 in various areas of their lives. Scores across all categories were averaged to identify a respondent’s overall success level. All correlations presented relating to behavior frequency, unless otherwise stated, were found to have statistical significance through ANOVA and Chi-squared analyses. Because the information we collected relies on self-reported data, it may have issues relating to selective memory, telescoping, attribution, and exaggeration. Because “success” is a subjective term, we did not have an objective measurement for it and relied solely on a respondent’s appraisal of their success across several types of success.

If you’re in the habit of sharing content you enjoy with your own audience, feel free to use our images and information for noncommercial purposes only. When you do, just include a link to this page to attribute us appropriately. After all, failing to give credit is a bad habit.

Republished with permission and originally published at porch.com

Top Benefits of Continuing Your Education

Best Ways To Improve the Appearance of Your Business 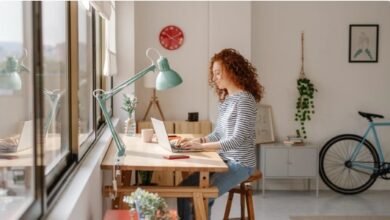 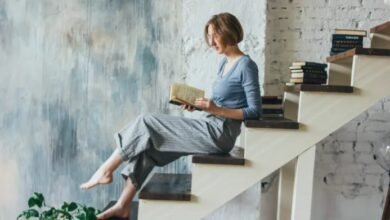